The question of whether it is students that cause parking problems in the university area is interesting. The simple way to determine this would be to audit the streets, get the registration numbers and assume all cars registered outside the city's commuting footprint are student cars. That would require access to the central number plate database. 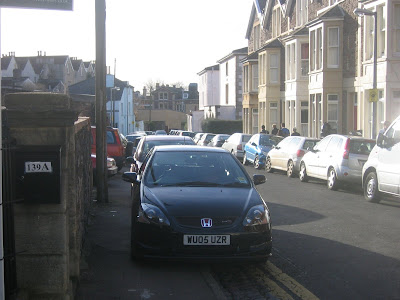 The alternative is just to collect the registration numbers in term time/outside term time and compare them, assuming that vehicles seen in more than one week in term time and zero times outside it are students. Thatwould be informative, but time consuming.
It's simpler just to collect some photos and make some random assertions without any data to back up the statements, that being how city planners appear to operate. Here then, is Highbury Villas, off St-Michaels hill, on a weekday. This area will not be in the CPZ, so whoever has discovered that it is a secret parking area will be able to continue to do so, possibly including the honda WU05UZR. 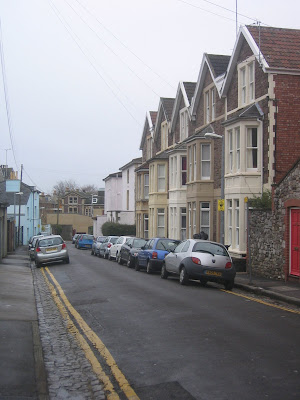 And here is the same road on a weekend. There is clearly a tangible difference in the number of vehicles trying to get on the yellow lines, as on a weekday there isn't a single free double yellow line to park on.

This is not within the proposed Kingsdown CPZ, incidentally, that ends on St Michael's Hill, directly behind where these photographs were taken. It will be interesting to see how more congested this street becomes after the zone is deployed.
Posted by Bristol Traffic at 14:54

Correction: this set of roads will be in the CPZ.