bit of a prang

Josh Hart's study into road use showed that even on roads with medium traffic parents worry about their kids being allowed out -the issue being not just traffic density, but speed. Here however is one of the benefits of main roads: kids love to come out and look at RTAs -especially if they happen early enough that bedtime doesn't get in the way. 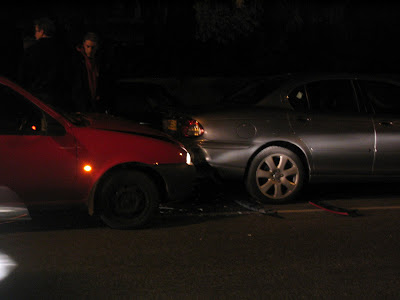 The Jaguar was reversing into the parking space, the Fiesta coming down the hill too fast and went into the back of it. It came off worse. The Jaguar has bit of duct tape on the back while the front of the fiesta looked fairly damaged. The little one found the insides of the engine quite fascinating. 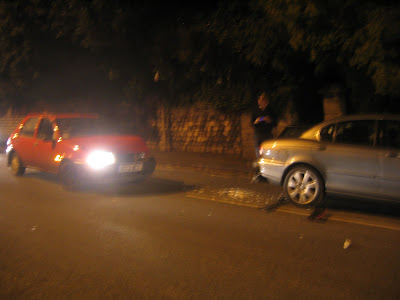 Nobody hurt, all is well. There have been requests for a pedestrian crossing on this road, and even a speed camera, but no, there is no perceived risk.

Well, now Captain Jaguar has been affested there'll probably be a camera up within the week...

er... that should read 'affected' sorry about that...

He turns out to live nearby and was trying to park. No, no cameras are likely; there have been attempts to put in a safe crossing for schoolkids at the top of the road for ages, but no action ever gets taken

I notice as well that some councils are taking their speed cameras out of service, which seems rather short-sighted.