Some news updates on Cabot Circus. Or, Tricorn 2, for anyone who remembers the Portsmouth Tricorn building; most hated shopping centre in the country until it was destroyed by the militant wing of the Royal Society of Architects.

Bike parking: Apparently this was a requirement in the local plan since 1997. Why then, was the place granted planning permission without it? 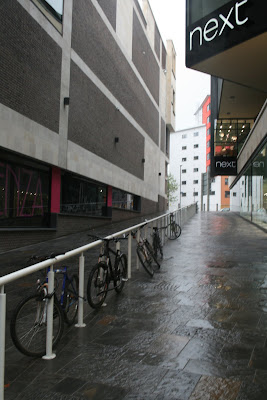 Car parking. The spaces there are extra large, long enough to take an estate car or even a Range Rover. This shows the reasoning behind providing car parking over bike parking. People with bikes have no money and cannot buy things. Even people with no money who come by bus are more welcome; they can carry shopping home. 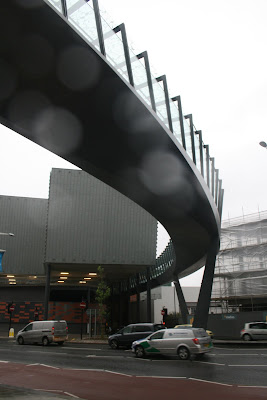 Congestion: the car parks were signed as full at 12 noon on sunday; the traffic jam was not quite as far as the St Pauls Roundabout, so slightly better than a normal weekday. Presumably anyone not going to carboot circus turned off at that junction, so bringing extra weekend traffic to those streets. 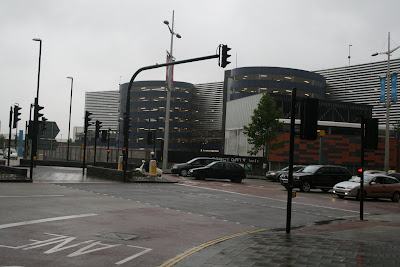 There was also a long queue to ikea off the M32 northbound throughout the day. Either the shoppers who could not park in Cabot Circus turned north to buy self-assembly furniture instead, or out of town visitors combined a trip to Harvey Nichol's with visit to Ikea and Tesco Eastville. If they chose the latter option, then more city retailers will benefit from the traffic.

Finally, in some news that does not bode well for the project, John Lewis reported sales at Cribb's causeway down 25% on last year. Now, that could just be people opting not to hang round Cribb's when there was a new shopping centre to visit, but they report similar figures in out of town centres in Southampton and High Wycombe, both areas outside the footprint of Cabot Circus. Other factors may be at work. The issue for Carboot Circus retailers then is not how to get visitors, it is how to get the visitors to shop.
Posted by SteveL at 11:33

I went down to carboot circus the day after it opened. Not by choice but because some wise guy decided to relocate my bank inside the jesus building itself.

While trying to fight my way through the crowds and get in and out as fast as possible the one impression I took away from it all was the lack of bike parking.

It wasnt hard to notice all the bikes tied to every available lampost, handrail, tree. Clearly people want to go there (for some reason) and they want to get there by bicycle. In a brand new development in one of Britain's new cycle cities you'd think that bicycle parking would be high up on the agenda.

I'd complain more.... If I actually had any interest in going there.