The Toyota WP56PNF has a printed sheet saying "Warning police notices nearby tell pavement parkers that they may be towed away". 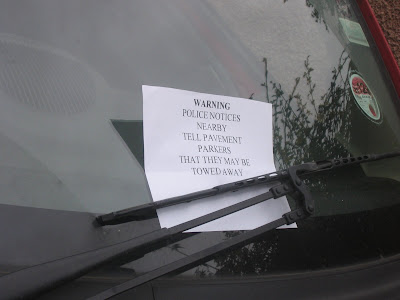 Which, given the fact that it doesn't happen may be true -the signs are there- but meaningless. 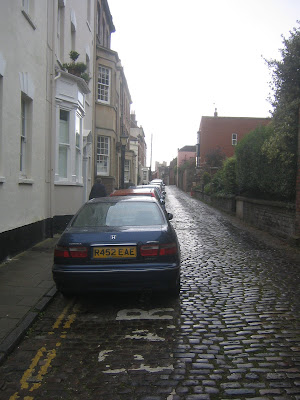 on a different day, the honda R462BAE had a handwritten note. "Your vehicle is illegally parked and is causing greate inconvenience and is a hazard to builders trucks and other's vehicles" 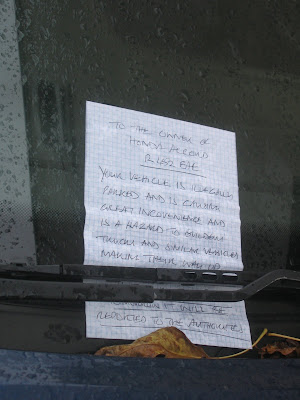 At the bottom there is a threat. "You will be reported to the authorities". The author of the document was nearby; he'd phoned the authorities a few hours earlier but nothing had happened. Which doesn't surprise anyone. What is interesting is that some people in this street do actually care about parking issues and are trying to deal with it. Our Kingsdown dataset implies that the main vehicles parked along this keep clear/double yellow line area are actually a couple of local cars. Maybe it's just outsiders that get the rude notes.
Posted by SteveL at 15:54

We have a system where if you take a picture and send it to the authorities, the perpetrator gets a letter, and a bill. Do you not have that in the UK?

No, but I really wish we did... especially if it applied to people driving with a mobile phone. Or even just driving like a twat.

An interesting idea, but how would you stop someone photoshopping your reg plate onto someone else's car? :)

cross-correlate your mobile phone's location at the time the pic was taken with the national ANPR database of all cars, see if they were near each other at the time.