This is the St Michael's roundabout, where religious dissenters were burned alive during Queen Mary's rule. Obviously in those days the mini roundabout was not present, as the dissenters would have been run over before the burning was complete.

On the morning this photo was taken, the ongoing BRI electrical work has resulted in bits of St Michael's Hill being dug up, and single lane access blocked by traffic lights. This has created a traffic jam, which goes across the roundabout; some vehicles are waiting in the roundabout itself, trying to avoid eye contact with everyone else. The Renault Clio, for example, has just come out of Cotham Hill and turned right into the traffic jam, so making it harder for vehicles coming up St Michael's hill to turn right onto Cotham Road. 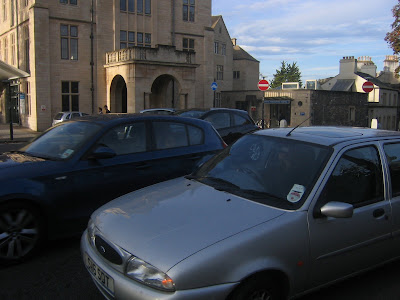 These two cars, the fiesta and the BMW are both trying to turn down Cotham Road, which isn't actually wide enough for two vehicles. The fiesta was partway through turning left from Hampton Road when the (fast moving) BMW appeared round the parked cars, sounded its horn and forced its way through. I don't think the Fiesta driver was very impressed; there was much sounding of horns and emergency braking by both vehicles.

There's an interesting question here: who is at fault? Is it the Fiesta driver, who didn't give way to the 1-series BMW on the roundabout. Or the latter, which didn't give a car that was midway through a manoeuvre the right of way? Or did they both have unrealistic expectations?
Posted by SteveL at 16:43

You can't blame the BMW driver for slipping into stereotype and being a t***, so clearly the Fiesta driver is at fault.

@SP: I dont know who to blame here. I think the BMW was being over assertive about the right of way, because once the fiesta had started to pull out, it was somewhat committed. I think the mistake was the clio that blocked the junction and ruined visibility.