This is pub in Portadown, County Armagh, part of NI's "Murder Triangle" during the Troubles. Let's see what ideas this town can have for Bristol. Take this terrace, with an interesting looking pub on it, a pub covered in cameras and flags. 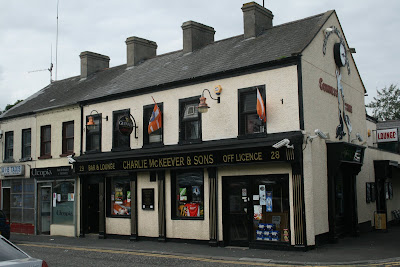 The pub is covered in cameras to make sure that there's nobody outside waiting to harm the pub occupants. The flags provide early warning that the pub is frequented by supporters of the local Gaelic Football Club, and therefore that the songs will be more on the theme of "Come out you Black and Tans" rather than "The sash my father wore". Any observant visitor will note the markings and not end up, as you can do in Bristol, with someone asking you what you thought of the match, without you having a clue which team you are meant to be supporting and hence what to say to get out alive. 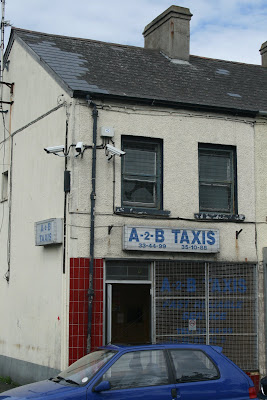 Right next to the pub, a taxi firm to get you home. During the troubles, a lot of people got killed in this area; the graveyards are a memorial to a misguided civil war. For either paramilitary group, taxi drivers were an easy target. You phone for a taxi, they come round, you shoot them and drive off in your own car. That made them pretty cautious, and taxis are split, even today, into Catholic and Protestant; Nationalist and Unionist. This probably is a nationalist one, given its location, "The Tunnel", flashpoint even today.

To get a taxi in this town, you need to know who to phone, and trying to get them to come round to the Gaelic Football Club's bar at 1 am is pretty tricky if you have an english accent: you need to explain who you are related to before they trust you.

Most people, on hearing what it is like to get a taxi at 1am to a gaelic football club in a Nationalist area are pretty appalled. It doesn't sound like a good peace. But some people take on a more thoughtful expression. They ask how much the taxi cost? And did it turn up? Did it take you to your destination? The answer: 3 pounds, yes and yes. Then their expression becomes more wistful. Because there are parts of Bristol where taxis dont like to go at night. Try getting one at midnight on a Friday night to go from the centre to Hartcliffe or Lawrence Weston and they will find some kind of excuse, some mechanical fault or them being on the way home. Only Yellow Cabs are likely to help you, apparently. Because for most of Bristol's Taxi/minicab fleet, it isn't profitable to go to the fringe estates, and they're worried about the passengers doing a runner.

By partitioning this town into Nationalist and Unionist estates, by having separate firms to address each area, and by requiring passengers to authenticate themselves before being picked up, this town has addressed the problem -better than Bristol.