Deadlock on the school run

Deadlock: in which more than one entity try to acquire the same set of resources, and by doing so create a situation in which none of them can acquire enough resources to get work done. In traffic, it is where vehicles trying to enter a junction stop the vehicles in the junction from leaving, and hence nobody can achieve their goals.

Here's a spot of bother in Clifton. There's the Volvo XC90 WV57EUU, which we already have indexed, here helping pedestrian access to the school by slowing down traffic. It's not on the pavement today, or blocking a driveway, just right on a corner where there is a double yellow line to remind people not to park. Its' not dangerous, look -kids still manage to cross the road alive. 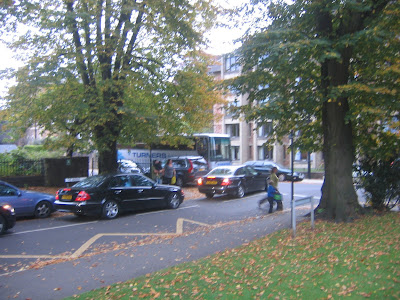 Unfortunately, while such conscientious traffic calming helps most vehicles slow down, it does nothing for coaches trying to do a turn -they need this space to get round. A traffic jam is now building up with three lines of cars, and the Volvo desperately trying to reverse a car for which reversing was never a design goal. Or if it was, that and "fuel economy" came lower down the list than "create the illusion of security" and "wide" 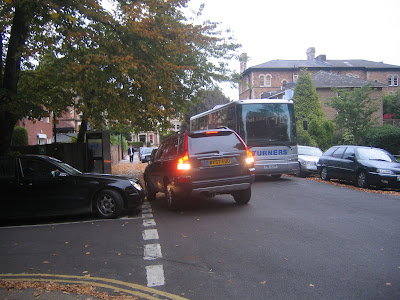 What we in computing call a "deadlock" has developed: nobody can get out because the other vehicles are blocking each other. Here's how it gets resolved. The Volvo struggles to reverse.

Leaving room for the Mercedes to pull through, and get stuck in the same place. Nice bit of forward planning there. Must work in investment banking.

Incidentally, the reason the Volvo had such a hard time backing up is not just land-barges like this are a dog to reverse, there's another parent blocking the other corner, again on the double yellow lines, this time in a pickup WR56UUH. 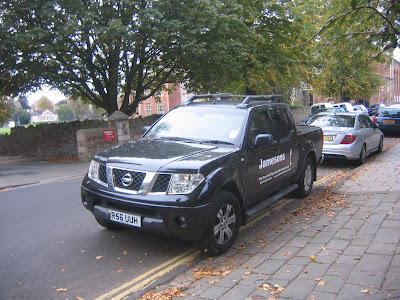 You could hang around all day waiting for a situation like this to resolve itself. But we have other schools to visit, so we must leave them to it.
Posted by SteveL at 07:26