Having rented a flat in Clifton in times past, one of the oddest things about it was how everyone ignores each other. Whereas in Horfield everyone says hello to their neighbours, in Clifton the residents like to pretend the other residents don't exist. Maybe because they are competing for parking spaces. 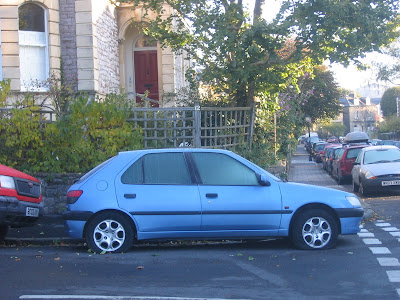 Here is a car that's had all its tyres let down. Its covered in frost, so was clearly out overnight, and someone decided to penalise it for something. 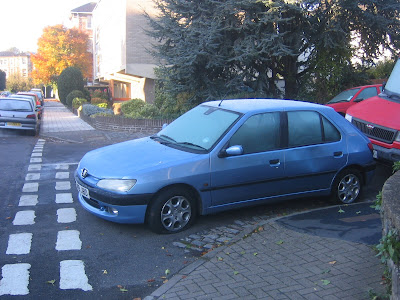 Question is, what? Its corner-ish, but way better than a lot in our dataset. There is room for -wait for it- a small child cycling on the pavement to get along here, without the Evening Post catching them and writing a three page special on this menace to our streets. Usually it is harder than this to get round the city on the pavements. Yet someone has flattened the tyres. Has Clifton discovered militancy? Because if the residents of Clifton start going after cars for minor parking infractions, well, the rest of the city is going to do it properly. 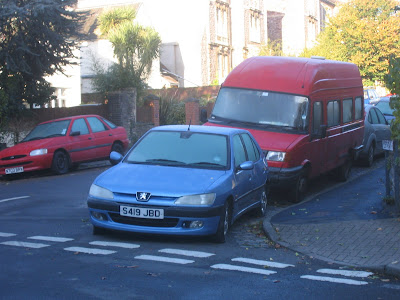 More likely is the van behind is boxed in by S419JBD and upset about it. Hopefully -and this is not meant to be taken sarcastically- the tyres were let down and not cut. There is a big difference between mildly inconveniencing someone and costing them a couple of hundred pounds in repairs.
(a day later the car is still there, note in the window saying they were vandalised and the police were notified. Which implies someone really did damage the tyres)
Posted by SteveL at 08:25

I've just been accused of victimization at http://southvilleparking.blogspot.com, but I think what we see here is the real thing.

I must take issue with your 'corner-ish' comment. That is waaaaay corner!

Actually, I hope the police take the opportunity to give them a ticket.

Looks like someone gave the rear nearside door a kick, too.

They aren't blocking the dropped pavement. I really did get a small child on a bike along here without worries, though it did make stepping out trickier as it was harder to look round -but then again, with a narrower road, its easier to cross.