This is the bike path between the MOD Abbey Wood site on the West and the new "Lockleaze North" development to the east. 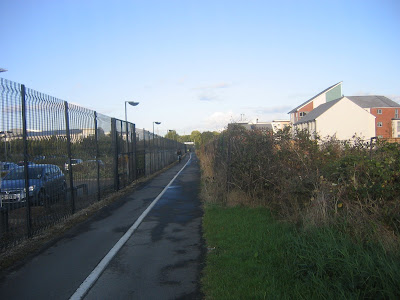 The MOD are about to add 600 new desks to the site, with an extra 2200 scheduled to arrive over the next four years. To mitigate congestion in the area, there is this bike lane, the Abbey Wood station -which has excellent connections to everywhere but suburban Bristol- and plans for nearby housing. 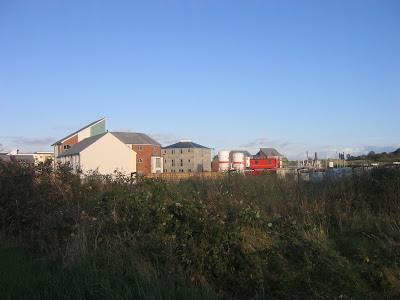 Here is the nearby housing; expansion of this site appears to have halted. If that is the case, these houses will be less part-of-a-village and more middle-of-nowhere. They will be handy for the MOD, UWE, HP, and other North Fringe employers. 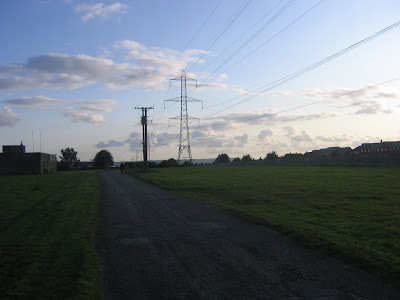 To the south, there are the local rugby clubs and a nice route to town. This is the West side of the railway line, which Josh Hart is proposing to turn into the North Bristol Cycle Expressway. If this doesn't come about, if the cycle city plans do not lead to a step change in commuting, then the migration of 2800 MOD jobs to the area is going to add even more congestion to the A4174 ring road/M32 route -though not as much as if anyone were to extend the ring road round to the south.

I've used this route since I started cycling to work regularly in October.

It's a good car-free route that hundreds of cyclists and walkers use every day.

But twice recently I've found the gate next to the Ashley Down Old Boys Rugby Club closed.

The only way through is to lift your bike over the fence and climb over to join it.

There are also some unfriendly signs saying that it's private property and they reserve the right to close the gate whenever they want.

Does anyone have any further information on this situation? Has the Rugby Club been approached? Should the council be talking to them about making it a proper cycle route? I cant imagine a Rugby Club would wish to oppose cycling and walking. Surely a reasobable discussion could enable the route to be open, properly lit and fenced and surfaced (all of which could benefit the rugby club).

Am I newcomer to an old arguement? Or should we initiate some kind of dialogue with the relevant local authorities, cycling organisations and landowners?

Is this the big gate up by the MOD, or something down by the road? If its at the road, it may be an attempt to stop stolen cars ending up on the rugby ground. If it is the MOD-end, there are some ways to get past by coming off early or (MTB only) going over the bank to the side.

I will check it out, but it is something to raise with either the bristol or S. Gloucs people (depending on the border).

It's the gate right between the MOD and the Rugby Club (well away from the road).
It's smack in the middle of this googlemap (satellite view).

Judging by the number of tyre-tracks in the frost yesterday morning (Mon 8 Dec 08) there must have been at least 50 cyclists who had to climb over the gate or go an extra mile and a half round another way.

I'm interested to know of any shorter way around. But more interested to see if the gatekeeper/land owner would be reasonable about this. Off road routes for cyclists have got to be better than more traffic jams, pollution and road accidents.

Ok. That gate I haven't come across closed before; only the one slightly to the west.

UPDATE
The gate in question has now been open every time I've needed it since the start of the year.
No idea if the improvement is a result of my online grumble or not.
Either way, it seems only fair that I should use the same outlet to express my delight at the improvement in the situation.
Gatekeepers and Bristol Traffic readers - I thank you.