A reader called SP left a couple of comments implying maybe were over-sterotyping BMW drivers. Interesting thought. Yes, there is a fair amount of sterotyping going on, but mainly of range rovers. BMW drivers are just like any other local driver. They need somewhere to park on weekday, here the car RF55NAE outside Christchurch School, Clifton. 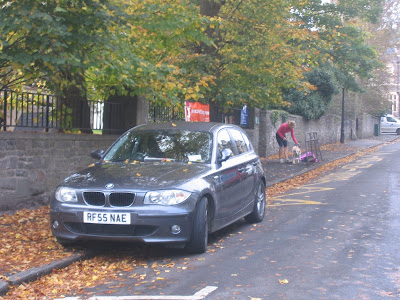 The take kids to school in the car, a car they have to park near the school, here N707WJB outside Christchurch School, Clifton. 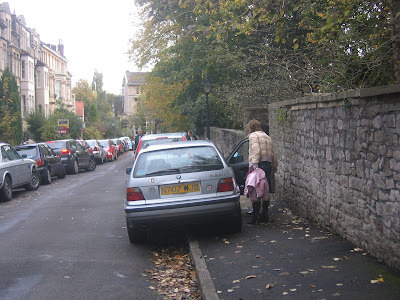 And they sometimes leave their car with the door open while they do the child dropoff, so as to make sure no kid with a scooter or bike dares to scrape the car RE52ZKO while they take their primary-school age child to Christchurch School. 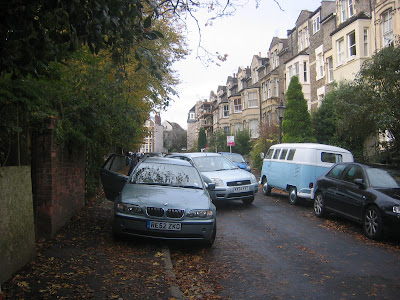 Or on the keep clear zones at the corner, by -wait for it- Christchurch School, Clifton. 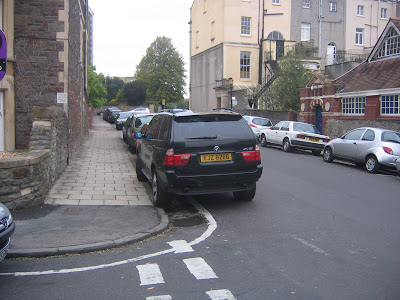 Sterotyping? No, documenting. None of these cars are on double yellow lines, only one (EZJ8266) in a keep clear zone. The rest are just up on the pavement by the school entrance, leaving enough room for through traffic and generally blending in. Which is why their coverage is actually fairly minimal. It's not as entertaining as the problem of how to park a Range Rover in Montpelier, or as ironic as driving school cars parking where they shouldn't. And it's certainly not as photogenic as an ice cream van driving down a bus lane. Maybe we could start sterotyping them, but well, it's been done already, hasn't it? Maybe once we've got bored of making fun of range rovers or driver deadlock outside schools at dropoff time.
Posted by SteveL at 11:48

Actually, I think that there is a thing between BMWs and the way their drivers act. Though whether this is because people who drive like they own the road are naturally attracted to BMWs, or there's something in the cars' Teutonic engineering that brings out the tw*t in everyday people is unclear to me.

I suspect that it's the latter, as I've had a similar experience driving a hired Volvo. Within 2 miles I was driving with an attitude that can only be described as a cross between school-run and and Apache helicopter skimming over Baghdad.

Oh, that is one excellent metaphor. We may have to use it. If you dont want to post in pics of your own, you could join up as copy editor ...

Thanks - I'll take that a a straight compliment, with no tongue in cheek. I'd love to post you pics, but being as I'm in Tyneside, it may dilute Bristol Traffic's local focus.

Of course, I'm sure you spotted the gag in the metaphor too. The US Army does actually use the Bristol (/wherever) school run as advanced pilot training for hostile environments, where aggression, stealth and murderous speed are required in equal measure . . .

I always refer to BMWs as "Nazi Staff Cars". Can't remember where I originally got the reference from...