This is York Road, Montpelier, with three cars clamped for non-payment of road tax. Well, the government needs cash. Lots of it. And as road tax isn't dedicated to car driver facilities, the way driver pressure groups demand, the government is free to divert the cash to nationalising banks and other emergency actions. A lot of cars are going to need to pay their tax for that, so we are fortunate that the DVLA vans are driving the back streets of Bristol, clamping one car 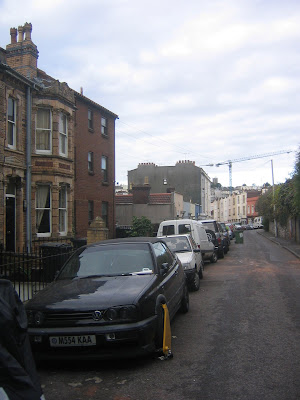 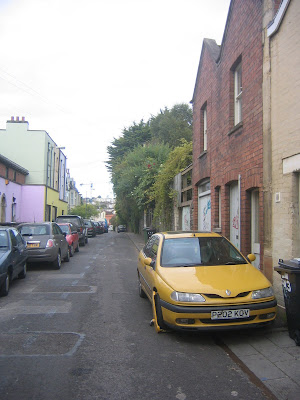 That must have made their quota for the hour. 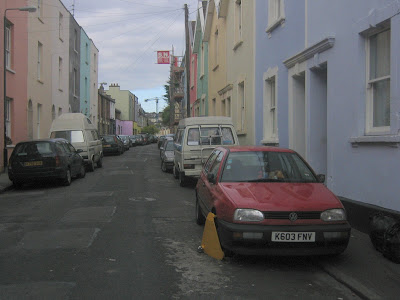 From a data mining perspective, it means that vans are driving round doing a number plate scan and database lookup for every car they pass. What happens to that data? We here the police saying that ANPR will deny criminals the motorways, but is a secret goal to deny people who are four weeks late to pay their road tax the right to park on a Montpelier pavement?

Clamping cars has some major benefits over towing. Its much cheaper: a single van can have a stack of clamps it can roll out, tagging a whole street in half an hour. It also serves as a visible deterrent: everyone who sees the cars sees that you can't park here with UK car without a valid tax disk. They learn. And so together we provide enough money to keep the banking system afloat for another 48 hours.

It's poignant these pics were taken on the same day that the council cancelled its car towing contract. Without anything resembling a functional parking services organisation, the tow company was pulling in cash without having to do any work. And even when they did tow a car away, they weren't providing a visible deterrent: they were creating a new parking space. Maybe it's time to move on and come up with a viable plan.
Posted by SteveL at 12:17

I remember reading about a Treasury report done in the early 1990s showing calculations that if motoring taxation was to truly reflect the costs of private motoring to the tax payer then VED would have to be £1000 and petrol £15 a gallon.

15 years on, one wonders what inflation has done to those numbers.

It's also a great pity that the report wasn't acted upon.

If it had, there would now be loads of spare parking spaces in Bristol.