Maybe if I park over it, it doesn't count?

This is on the road between St Andrew's Park and Sefton Park school; there's a zebra crossing a few metres away; this pavement is nearby. 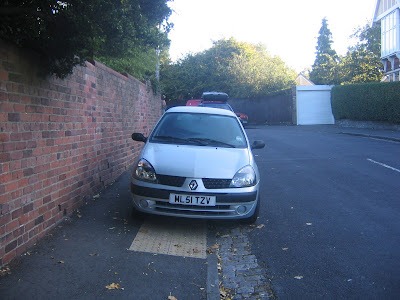 And what is on it, a Renault Clio ML51TZV, seemingly parked on top of the sloping bit of the pavement that is there to make pedestrian crossing easier -the bit where the parking rules say it is an offence to block.

But here's a thought. If you park your vehicle atop the sloping pavement, well, the slope goes away, doesn't it? Because the bit of the car that is left on the road is no longer blocking a dropped kerb. The bit that you aren't allowed to park against has ceased to be, and so, presumably, the parking offence?
Posted by SteveL at 08:15

Same applies to disables parking space I think: If your car is parked over the disables symbol, then there's no disabled symbol; ergo, it's now a normal parking space.

It must be the law because the police don't do anything: They'd do something if that wasn't allowed.