Not an island -a parking bay

A photo of this came in the mailbox a few months back -here is a return visit to a bit of the centre to see if it's true. Yes, there really is a parking square in the middle of the traffic island at the Princes Street/King Street roundabout. 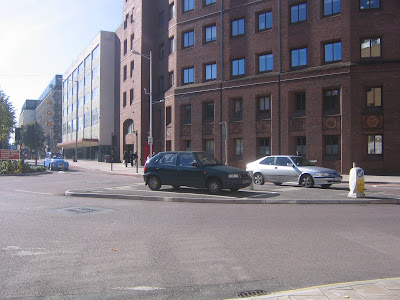 Historically, traffic islands existed to provide a safe place to stand while partway across a road. They provided some safety, without inconveniencing cars the way zebra crossings and pedestrians lights did. For the pedestrian, they meant you only had to run half-way across a two-lane road, and so in busier roads, still cross -provided there were intermittent gaps in either lane. However, there was a price. First, they were a danger to cyclists, as they would force overtaking cars to cut in before the junction. Aggressive cyclists can use islands to their advantage, but you need to be far out and fairly assertive -which means fit. The other flaw with them was that they took away road space from cars. By marking out a rectangle for parking on this island, that problem has been rectified. Bristol has gained one extra parking space!

Returning to the name, traffic island, it is still valid. Whereas before it was an island in the traffic, now it is an island for the traffic!
Posted by SteveL at 20:18

I noticed this a couple of weeks ago, when what else but a BMW was parked there, and I pondered as to what actually makes a white rectangle a parking space? Is this a universal invite to park your car?

No idea. There is no sign saying 'police only' or anything