The scooter/bike park is closed, leaving only the school dropoff zones on both sides of the road leading to the entrance. Yet they are empty? Strange. 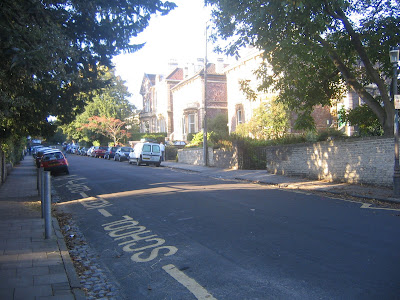 There are some parents, walking around. A few are waiting at the corner to find out who has parked their Audi TT right on the corner, so making it harder for push chairs to get across. 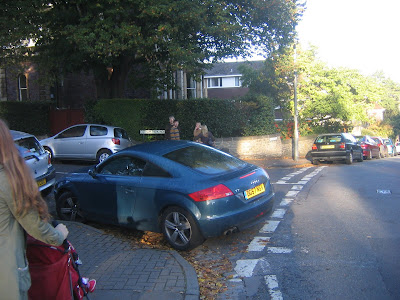 But look, there is room to get the small child in the push chair across, and he seems really excited to be that close to a car. Small kids love cars -right up there with Bob the Builder and The Shiny Show as valuable role models. 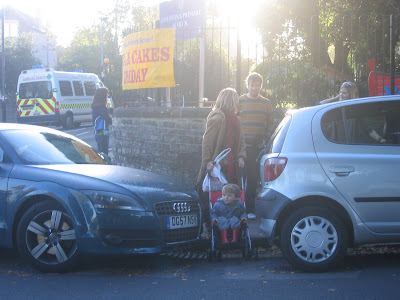 Rather than complaining about the car DG57NSV, these parents need to recognise their effective position in society. By choosing to push their kids to school, to walk or to scoot, they are clearly people with time on their hands. They are clearly not people rushing off to a prestigious job, or they'd be driving past and pushing their kids out on the zebra crossing without even slowing down. 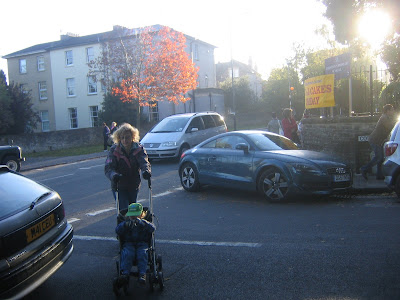 Instead they are walking round the city, enjoying the sunny day, probably heading to someone's house for a coffee and some chit chat. They are not going to contribute to the economy, either by engaging in productive labour or active consumption. They aren't even going to bring petrol revenue to central government by driving. They are non-participants in the economic well-being and growth of the city. As such, its right to prioritise them less than car drivers, who clearly are important, busy, in a rush and when not working hard, paying central government a hefty amount per mile for the right to park where they like in this city.

Pedestrians should give way to cars at all times, and stop complaining.
Posted by SteveL at 16:41