It turns out that if one cycles up through MOD Abbey Wood before 0900 local time, there is in fact a very large traffic jam of cars waiting to get into the secure car parks. 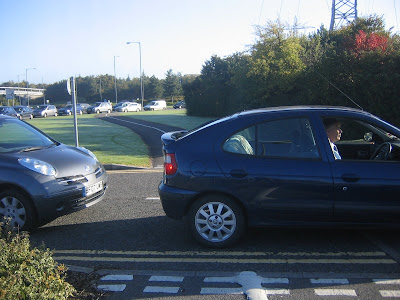 Unlike Bristol City "secure" car parks like the infamous Trenchard Street car park, where you clearly have to have your name and date of birth tatooed onto your neck to get arrested for stealing from cars, this MOD facility is pretty locked down: guards, ID, and a covered bridge to get to the offices. The Abbey Wood setup is to avoid car/truck bombs: it was built in the early nineties when the Provisional IRA were regarded as a terrible threat, rather than a terrorist group to fondly reminisce about. All parking is a long way from the offices, instead it is close to the ill-fated Cheswick development. 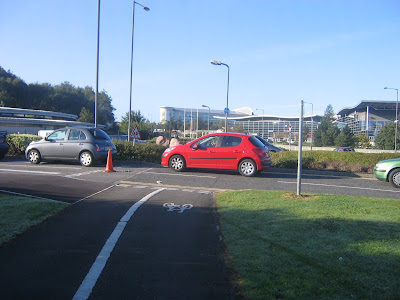 Getting through the security checks to park is pretty slow, hence the tailback all the way to the A4174. Hence also the cars blocking the bike lane. Perhaps we should demand hatched yellow junction markers here, if only to make the junction more slippery and entertaining in ice.
Posted by SteveL at 09:04

That particular traffic jam last Friday was a little exceptional, its not normally that bad a queue to get into the visitor car park. I presume one of the security staff was munching a doughnut rather than letting cars in. No problems slaloming round the cars in the road either, especially after a practice run on the stupid yellow barrier.

I think the queue in the evening at about 5 ish to get onto the ring road roundabout is more satisfying. Its there every day, and just leads straight into a traffic jam all the way round the ring road.

If you go through there regularly too, I could bring my camcorder and helmet cam and we could do a spoof MTB video of their obstacles. If we do it at lunchtime I could even borrow a camera tripod from work

Steve, I do go through there regularly (daily infact), although the big pannier bag with my laptop in kinda reduces the scope for a spoof MTB video (that and my inability to do bunny hops).

In all seriousness though I don't really have much issue with the yellow barrier, there is a road the other side of it so you have to slow down anyway, and my slalom is getting quicker all the time!!

It has dubious safety value as everyone except a complete numpty would slow to cross the road, and it doesn't prevent you hammering it down the rest of the hill. So really it was a waste of time to stick it in.

Lets hope they don't stick a barrier on the corner further up the hill, that would be lethal. But not as lethal as the mini bollard on the cycle path round the train station side of the path... or the new crossing over the road to tallsticks, which is all off centre and off camber.

Sadly I can see justification for trying traffic calming on that slope, as its next to the nursery, and loads of people walk from the visitor carpark across the cycle path. I am sure some top brass will get upset with people like me doing 20+mph down there sooner or later. Its a health and safety nightmare I tell you!!! ;-) Of course any traffic calming would just endanger and inconvenience cyclists, but who cares about that!

Anyway I digress, happy to help you add to the picture count on this site, love reading it. Even motivated me to take my camera out to photograph traffic jams, just havn't got round to submitting the pics to you.