The seventies comes to Virgin XC

For anyone planning to head north by rail, the best way to do it in recent year is get a train to wales and then a Great Western train through the Welsh borders. Because the alternative: Virgin XC, was pretty mediocre. Sometimes, though, it was all that was on offer, especially if you were heading to Sheffield or Edinburgh. For that, there was the once-a-day Virgin cross country train, some slow vehicle that would not look out of place on a South London commuter run, but for long-haul journeys, journeys where luggage was something bigger than a small backpack, they were the wrong train. Even though there was a power socket for your laptop, you can't really get work done when the train is stopped somewhere for two hours in the midlands, the aisles full of people and their suitcases. 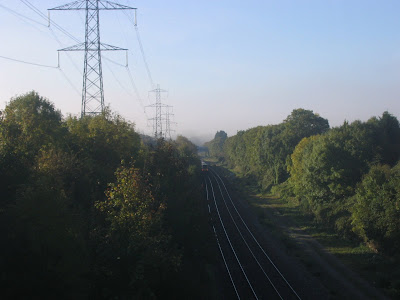 All this will change. Because Virgin XC have announced they will be rolling out 125mph high speed trains on the trans-country route, which is Bristol's only direct train to Scotland. Some people may despair that this means that the train line is rolling out trains that were first deployed in the mid seventies on British Rail Intercity. Some people may despair that long-haul diesel trains are still polluting and, if empty, fairly inefficient per passenger mile, and costed to cover all that diesel fuel that gets burned. There is also the fact that travelling by train is now viewed as a premium activity, and priced accordingly. These are negative viewpoints and will only lead to a crisis of confidence.

We in Bristol Traffic celebrate the redeployment of 1970s-era high speed trains to our region! We think it goes hand in hand with all the other 1970s retro events going on: abba musicals, oil price rises and the de-facto bankruptcy of the British Government, which, having taken over the banking system now owes a few trillion $ in credit defaults. Let's get those glam-rock clothes out and start dancing to Abba as we wait for our 125 mph trains to the North!

[Photo: a train heading towards Templemead from Parkway. Josh's proposed Northern Expressway cycle route would be on the left side of the lines].
Posted by SteveL at 16:27

My spy on the tracks informs me that:

1. The Voyager trains are affectionately known by train crews as 'vomit comets' on account of the appalling smell in the carriages.

2. Only 2 Intercity 125 train sets have been secured to date for the cross-country routes.